That’s a Lot of Letters, Lads (And Ladies)

Our third and *penultimate weekly PubLetters was a happy, sad, and official evening.

We filled every table, and set a new record of 79 hand-written cards and letters.

Benedict Cumberbatch will be pleased; we also wrote Mom and Dad, President Barack Obama, and sent a note to the Nick Virgilio Haiku Association in Camden. The Pope should also be happy to find something in the Papal mail box this morning. 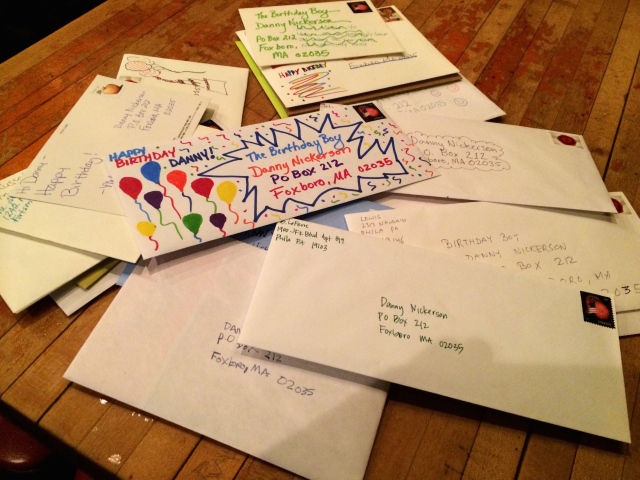 We wished a Happy Birthday in card after card to little Danny Nickerson; he’s got terminal cancer and his humble wish was for lots of birthday cards in the mail to his home in Foxboro MA home. Here you go, Danny. We also sent to some Thank You notes to our soldiers via Operation Gratitude. Be safe, soldiers. 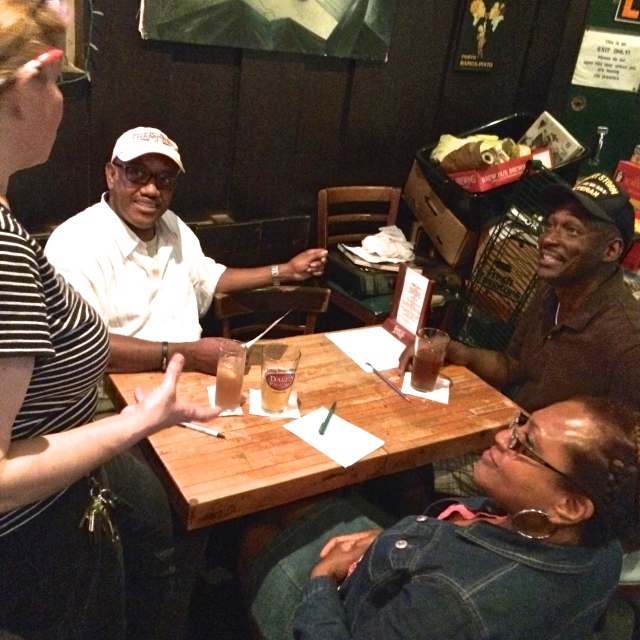 And, as we hoped, half a dozen U.S. Postal Service Letter Carriers were on hand–the National Association of Letter Carriers union was holding their big convention in Philadelphia this week. We invited all 8,000 of them, and it’s probably just as well they didn’t all show up at once–they see enough lines at their Post Office jobs, we reckon.  Above, Doobies’ owner Pat chats with these friendly Letter Carriers from Georgia as they take a break from delivering letters to write a few.  Thank you, Letter Carriers, for your official stamp of approval–and for getting our mail to the people we love.

Each week, we seem to discover some new angles to this old and lovely communications art: for the first time in my life, I used a wax seal to secure a letter. Thanks, Alexandra. And our stationery sponsor,  Casa Papel, brought a classic air-mail style sheet: write on the page, then it folds into its own envelope. Minimal, beautiful.

*Yes–the (for the nonce) last PubLetters will be this Tuesday, July 29th at Doobies. Come on out and write a “How I Mis-Spent My Summer” letter or whatever you like. Don’t worry about postage–Trophy Bikes will have a nice selection of 1st-class stamps, as always.

PUBLETTERS WILL TAKE AUGUST OFF-then return Tuesdays in September at a NEW, Northern Liberties location TBA. “But I like PubLetters at Doobies,” you say, not unreasonably. Fear not, PubLetters will live on as a monthly event at the bar where it was founded. Watch this space for details.